Home / Rewilded Minds / Have Crazy Experiences and Write About Them 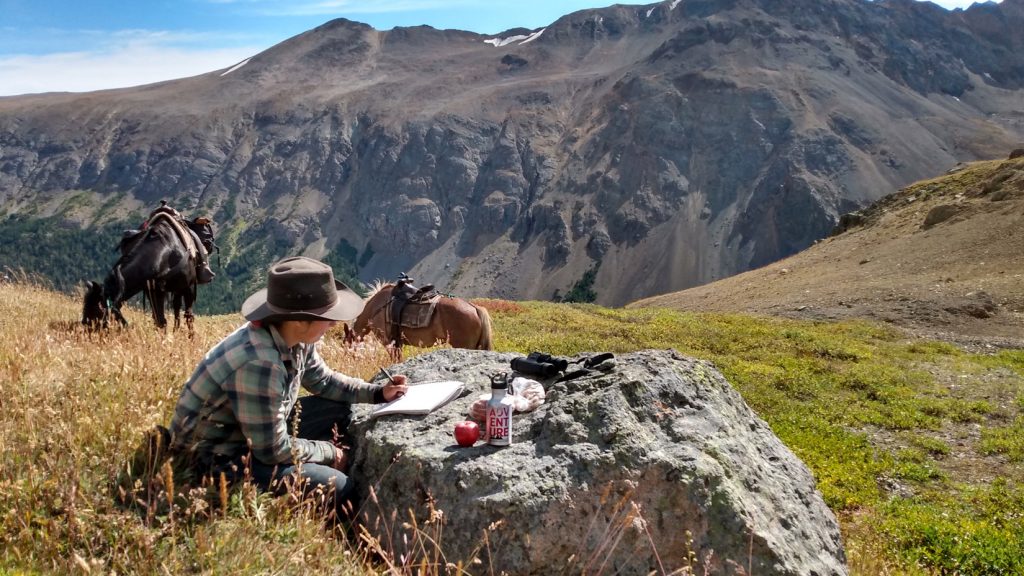 I was back at the ranch after a week of crazy experiences in the Tyax and Big Creek area. Little did I know my next week of adventures would make all of those seem tame in comparison. Things evolve quickly here, I know that well. I spent a week working on camp maintenance and scouting for animals, learning new trails and gaining countless new skills in the process.

During this week, my carpentry skills would be put to the test as Manon and I worked to fix the saddle rack. Kevan, our mentor guide, helped us fall two trees, showed us where they needed to go and left us to work out a solution for ourselves while he worked on fixing the roof. His trust in our developing skills to do a task that he could have done ten times faster was encouraging. My first task was to hack off the branches from the trunk using a machete to make a smooth log. I was surprised at how proficient I was at this, and how close to the tree I could cut the branches. My machete skills were improving drastically from when I first picked up the blade four months ago. Even a few days ago, it would take me many, many swings to cut even a small branch.

Deep in the wilderness we had limited equipment, which meant measuring the length of beam needed with my feet. From end to end the beam, which the saddles would sit on, was fourteen and a half steps when I walked heel to toe. I walked this distance along my log, marking the spot where I would need to cut, making it a little longer so I had room to cut it down if I’d measured wrong.  I’d found two wooden saw horses and set these up next to the creek. I laid the log across them and started sawing. I carried the log on my shoulder to the saddle rack and measured it. It was too long, so I measured again and re-cut it. Now it was too short. I didn’t understand how this had happened; I’d measured it so carefully. I was a little annoyed at myself about this, but Kevan said we could just switch it with Manon’s log. Hers was longer than mine but needed to be shorter, it was one of the roof beams, and with a little work we made both beams fit perfectly. Maybe I’m still too much of a European piano builder, thinking everything has to be exact and work the first time or perhaps I’m just too hard on myself when I make mistakes, but I’m learning there’s always a solution. If I know what the end goal is and understand what I need to do I can work out most of my challenges.

Now, we had to hammer in the beams. Manon and I held up the roof beam for Kevan to nail in place, and then we both attached an end of the rail. Manon went first, hammering in her nail easily. Mine didn’t go so smoothly. The nail went in well to start with, but then bent slightly and Kevan had to straighten it up for me before I could finish it. Still, we had got the job done. It might not have been the perfect piano, but it was fully functional and, most importantly, we had worked as a team to achieve our success. Through Kevan’s mentoring and guidance, Manon and I had learned valuable new skills. If we needed to fix a saddle rack again we’d know how to do it ourselves. We had individual success, but it was also a group success. I guess that can be a metaphor for life here at Chilcotin Holidays. Every individual person’s successes contribute to the overall group success and here at Chilcotin Holidays we learn how to be independent yet interdependent.

My next crazy adventure was spending two days riding around the Big Creek area with Kevan. Originally, the plan was that I’d ride Lorna, as we needed fast horses, but today she seemed more excitable than Crazy Jack, Kevan’s young, green horse. So, Kevan told me I would be riding him. At first I thought he was joking, other than Kevan, no one really rode him. It turned out Kevan was serious and Manon asked him if he thought this would a good idea. Lorna and Jack were the fastest horses we had, with Lorna more excitable, there were two choices, ride Crazy Jack or someone else went in my place. I’d wanted to ride this horse for a while, though perhaps not in these circumstances and I took the opportunity. I didn’t want to miss out on more crazy adventures, because with Kevan they would be crazy and I wanted to learn new areas and scout for animals, which would allow me to contribute more to the ranch environment. I saddled Jack and we were off to our first stop, Lorna Lake. Both horses had no trouble keeping the pace and it wasn’t long before we’d arrived. I’d only been this way once, riding from Lorna Lake to Tyax, and recognized a lot of the trail. Normally I don’t learn trails very quickly, so that in itself was an achievement. Trotting Crazy Jack through the forest and riding up the mountains, which were stained a hundred different colours by the minerals and glaciers, was quite literally breathtaking – although that might have been the altitude. At the top we had a panorama of Tosh Valley, Lorna Lake and Iron Pass below us. But my adventures had hardly begun. The real challenge lay ahead, in our descent from the mountain tops.

At first, we had to traverse a rock field, some of the rocks a foot in diameter. The ride wasn’t easy, but our horses could do it. Kevan paved out a way for me to follow, but sometimes Jack would go another way, and I wasn’t quick enough to correct him. I was frustrated at myself, worrying Jack would get hurt and questioning if I was good enough to ride this horse.Sometimes we had to walk the horses over the rocks, where I kept falling or Jack would stand on his reins. I felt even more useless, and scared of hurting Jack or myself. When we climbed back on the horses, I was close to panic, although I couldn’t really explain why at the time. I took some steadying breaths, but the worst was still  to come. Now we were going down what seemed to me like an almost vertical cliff, made of clay and small rocks. I’d run down a soft sandy slope much less steep and shorter than this with Tatla, the safest horse I know, behind me. It had been one of the most elating experiences I’d had here. But, faced with this cliff below me and an inexperienced horse at my back, I was terrified. I was thinking about quitting, taking another way down or using the satellite phone to call mountain rescue to get me off that mountain. But I wasn’t a quitter and Kevan was already far below me. I took some more steadying breaths and took the first step, encouraging Jack along with me. He needed very little by way of encouragement, following me over the edge with seemingly none of the same fear I felt. Almost immediately, I’d fallen, lost my hold on Jack’s bridle and was skidding down the mountain on my butt, unable to stop myself. I already knew how to walk down mountains like this, dig in my heels, let myself slide and hold the reins tight, but in the moment I was too scared to remember. I finally managed to stop myself, Jack was standing a safe distance above me. This meant I had to scramble back up the cliff, sliding down more than I was climbing up most of the time. Eventually I got to him, and started walking, only to fall again. When the slope was less steep, I could get on my feet and stagger the rest of the way to Kevan. I was still unaccountably scared, annoyed at myself for feeling that way thinking I never wanted to do that again. Except I knew I would, because I now had a fear to overcome.

The next day, we had another mountain to run down. It was less steep and more sandy making it easier. I slipped and skid down the first half, but felt less scared than the day before and there was a moment where I could suddenly do it. I had clarity I couldn’t explain. I was still a little scared, but I could do it. I half-walked, half-ran down the rest of the hill, not quite sure what had clicked, maybe it was something to do with having to hear something three times before you listen. At the bottom of that slope, I felt elated and sat down in my wilderness office, using a huge rock Kevan found as a desk, to start writing about my experiences. A week later, I would lead three people and horses down that mountain with Tatla. I would walk down at my own pace instead of trying to keep up with Kevan and I would be successful, reaching the bottom before the others were half way down. I wouldn’t be scared, in fact, I would be thinking about how much I love my life here. Then, I would learn to not run before I could walk, I would overcome my fear completely and be elated by my success.

As we rode back to the trail head, I was in an amazing mood and it seemed Tatla could sense it, she wasn’t my slow horse anymore. I thought back on the week about all the things I had achieved and felt more confident. Everyday, I feel mentally stronger and clearer on my goals and purposes; I am bursting with positivity. I am on my transformational journey to personal growth and empowerment 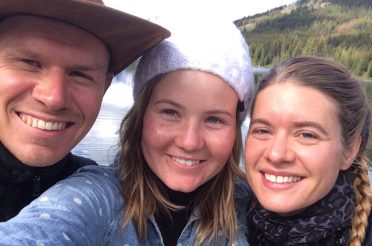 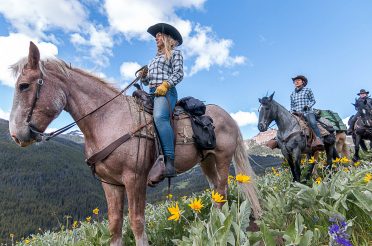 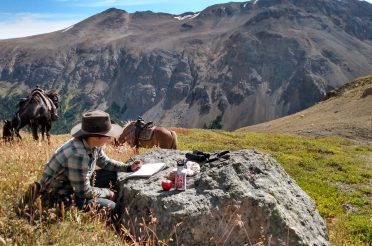 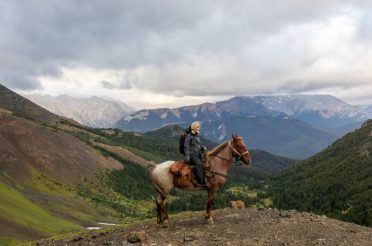 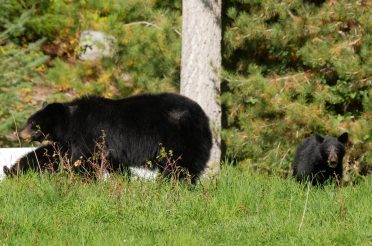 How an encounter with a mother bear changed my mindset towards nature and our connection... Read More 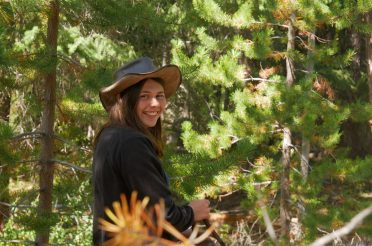 I came to the ranch to find my sense of purpose, to do something meaningful.... Read More 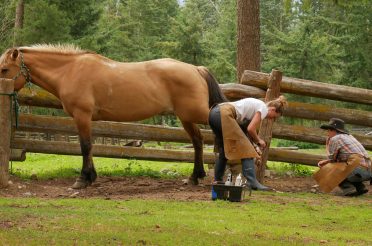 I came to Chilcotin Holidays to learn to be a horseback guide. Along the way,... Read More