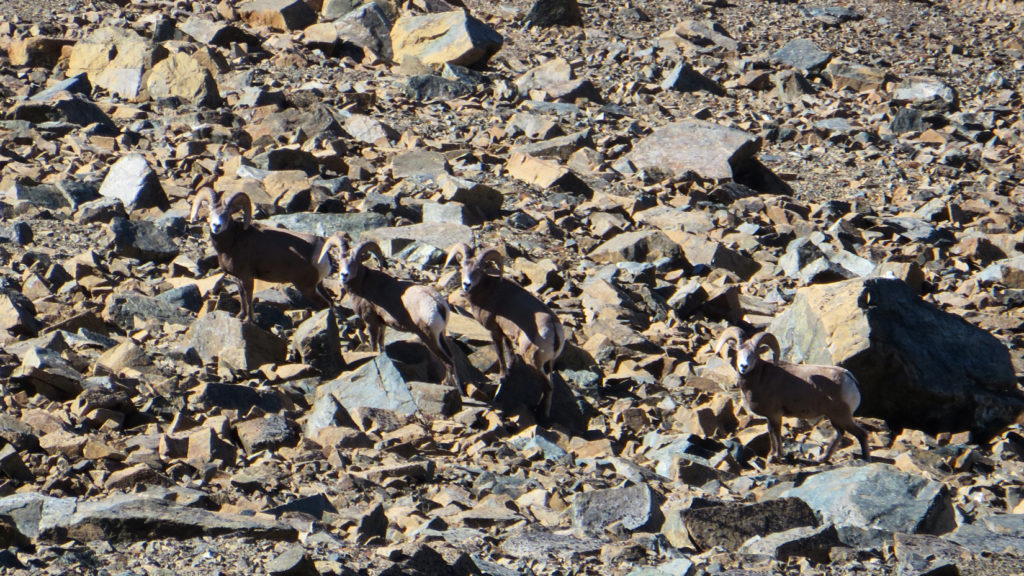 Whilst riding in the Big Creek Provincial Park, north of the South Chilcotin Mountains Provincial Park, we took the opportunity to scout for California Bighorn Sheep (Ovis canadensis californiana). The Wilderness Stewardship Foundation’s (WSF) goal is to conserve the area around the South Chilcotin Mountains Provincial Park into the future. One of the ways this goal is achieved is by recording the numbers of animals seen in the area. This is achieved through counts and recording the wildlife observed by WSF’s partner, Chilcotin Holidays who frequently rides in the area.

Our wildlife sightings forms are filled out on every trip into the mountains. They record the date and time the animal was seen, the location, number of individuals and age and sex if this can be determined. We also make notes about the habitat and behaviour as well as how far away the animal was from the observer. The details recorded on the sheet allow us to identify the sheep herds and ensure there is no double counting, which gives us an accurate representation of how many animals are in the area.

In Chilcotin Holidays’ 5000km2 eco-tourism territory, where the majority of WSF’s work is carried out, there are currently two groups of Bighorn sheep, each numbering around 150 individuals. The first group range in the Shulaps Mountains, in the east of our territory, the second in the Big Creek area, in the north. However, this herd migrates across the boundary of the South Chilcotin Mountains Provincial Park and Big Creek Provincial Park. This provides an additional challenge for recording the numbers as Big Creek is in Region 5, whereas the South Chilcotins is Region 3, meaning different government officials control the area. The sheep, of course, pay no attention to the boundary line, crossing it as they please.

When scouting for animals, we first search an area using binoculars. Although mountain goats stand out clearly on the rocks with their bright white coats, Bighorn sheep are brown and well camouflaged to their surroundings, even at a close distance, they can be difficult to spot with the naked eye. Each species have different areas of a habitat they prefer to occupy. Sheep are usually found higher up on mountain sides. They will graze on patches of grass more than half way up the slope and will make their beds above rocky outcrops. This gives them an excellent view of their surroundings so they can identify approaching predators or threats. During the day, between approximately 10am and 4pm, the wind blows up the mountain side, meaning any sounds or scents are easy for the sheep to detect sitting on their rocks. If the sheep are threatened, they will move uphill towards the skyline, this gives them a better vantage point, with nothing above them, all sensory information will blow up the hill towards them, this is their safest position.

When moving across mountains, the sheep often use the same trails which become well defined in the mountain sides. To find the sheep, we look for fresh tracks on the trails or across the mountains, sometimes it’s possible to follow fresh tracks with our binoculars all the way to where the sheep are sitting or grazing. As the sheep blend into their surroundings so well, it is easier to find the tracks, which allows us to see if there are sheep in the area, before searching for well-hidden Bighorns.

In the Big Creek area, we can easily use tracks to determine the presence of sheep as goats aren’t present in this area. However, in the Shulaps Mountains, goat and sheep habitats overlap, meaning from a distance it can be difficult to identify a track as sheep or goat. This means in the Shulaps area, we need to see the animals the track belongs to so we can correctly identify them. But, in the Big Creek area, seeing a track will tell us there are sheep in the area.

We were privileged enough to observe four Big Horn rams grazing on the Cluckata Ridge. First, we found only one sheep. Although the sheep are mostly brown, they have white butts, if they are facing away from us, they are easier to spot against the rock of the mountains. We quickly identified this sheep as a ram using the spotting scope. Rams and ewes both have horns, but ewes’ are shorter and more spiked. Rams’ horns are curled into a spiral. Their horns are constantly growing, and at around 6-8 years of age become full-curl. However, as the horns continue to grow, the tips are often broken off, meaning the ram becomes ‘three-quarter-curl’. The horns will grow back, so an old sheep can become full-curl again. The annuli rings on a ram’s horns, can be used to age it. Each year, during the mating season a new ring is formed. This is a stress-point as the ram is focused on mating, not on grazing and obtaining the right nutrients, which causes a ring to form in the horn.

As we watched this first ram graze using the spotting scope, we were able to identify two more in the same area. We continued to observe them and then realized there was a fourth ram away to the left. The distance was too great to count the annuli rings, but we could see two were full curl.

It was early September, at this time of year, the rams and ewes live separately, which meant the ewes wouldn’t be near these rams. The mating season happens in November, so in two months the rams and ewes would come into the same area, but for now, they could be a mile apart. We had found twelve sheep beds at the top of a rock bluff across the valley, we knew they would all belong to rams. And that meant there were eight more rams in the area, hidden behind rocks, in gullies or over ridges.

A threat to the sheep in the Shulaps Mountains is Bighorn sheep pneumonia complex, which is transmitted by domestic sheep and goats to the wild population. While domestic sheep can be treated with antibiotics and so survive the disease, this cannot be the case for Bighorn sheep. Lambs in particular will die from the disease, which results in a low herd recruitment – a percentage of the lambs will die from the disease meaning there are fewer sheep surviving to adulthood, reducing the number of sheep in the breeding population. This effect is seen in the numbers of lambs in the two sheep groups. In the Big Creek area, we found a herd of thirty-one ewes and lambs, with about half of the group being lambs. This is the expected scenario where each ewe has a single lamb, however in the Shulaps, we found a group of twenty-two ewes and lambs, containing only six lambs. This is why it is so important we record the age and sex of the sheep, not just their numbers. A group of twenty-two could seem like a good number, but with only six lambs, this is a sign the disease is having an impact on the population.

Developing a vaccine for domestic sheep would prevent them from spreading the disease to wild populations, but until this happens, pneumonia could have a significant impact on the Bighorn sheep. The herd size could be affected and the sheep may migrate further to avoid the disease.

Observing the group dynamics of the herds was fascinating. As the ewes and lambs moved across the mountain sides, grazing, there was always a lead ewe who would guide them. The lambs would run and play, returning to their mothers to feed. Sometimes the ewes would let them feed, most times, they would push them away, the lambs were being weaned onto eating grass, but they seemed reluctant to make this move. One day, we observed a group of eight ewes appear on the skyline, they’d felt threatened by something and had moved to a safer area, keeping high up so they could sense their environment. However, the four rams, knowing they were in no danger, had grazed contentedly the entire time we observed them.

We can never know for sure what the future will hold for these majestic wild animals, but with the ongoing commitment of WSF to conserving these sheep and their unique habitat, we know they will continue to thrive in this unique ecosystem for generations to come. If you want to be a part of this commitment to stewardship, why not join us for an internship with the Wilderness Stewardship Foundation? Located in the wilderness of the South Chilcotin Mountains, this is the perfect place to learn from and conserve nature. Check out our website for more info, we look forward for you to join our community! 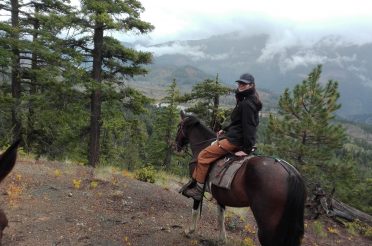